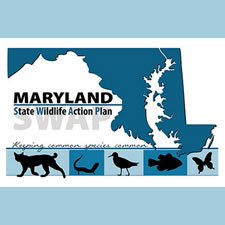 One look at the crowded mid-Atlantic and northeast corridor and you have quite the contrast with the wide open spaces of the western U.S. From DC up through Boston, the concentration of people is directly affected by climate change, residential and commercial development, and pollution. These are significant threats to wildlife conservation that the state of Maryland intends to do something about in a new 10-year action plan being released this month.

Added to the existing threats to wildlife is now hydraulic fracturing which could begin happening as early as October 2017.

According to Gwen Brewer, a science program manager at the Maryland Department of Natural Resources, “much of this plan’s focus is on climate change”

Says Brewer, “People are really seeing first hand the impacts of sea level rise and that’s something a number of the counties and communities are trying to figure out how best to deal with.”

Brewer adds that disease is also making its presence felt. Amphibians are in danger and “white nose syndrome has decimated the bat population.”

“Bats are really important for dealing with insect pests,” says Brewer. “For example, they eat a lot of the moths of insects that are considered to be crop pests and provide other services for us.”

The 10-year action plan includes one hundred and eight wildlife species, with birds making up some 25% of the species.

David Curson, director of Audubon of Maryland, says it’s going to take more than the Department of Natural Resources and its work to achieve desired results. The citizenry needs to contribute too. Volunteerism is vital to this program’s success.

“One of the points of this plan is that we can no longer depend upon a government agency like the Department of Natural Resources to fulfill all of the conservation needs because the funding just isn’t there,” says Curson.

The purpose of the 10-year plan is simple—prevent the decimation of wildlife species. And to there credit, Maryland lawmakers have been proactive in providing leadership in this direction.

Says senior director Naomi Edelson of the The National Wildlife Federation, “Congressional members have been some of the strongest advocates for more funding to help implement the action plan…I think almost all of the delegation has signed letters supporting increased funding for a federal program called State Wildlife Grants.”