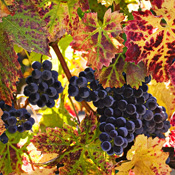 The general consensus is that California’s 2015 harvest is a superb vintage. The crop was lighter than the previous year and was one of the earliest seasons on record. Even with wildfires in some areas and a fourth year of drought, the quality was high in all grape-growing regions. An early bud break was followed by an extended bloom and cool spring weather. The result at harvest was smaller grape clusters, and crop sizes varied across the state. It has been estimated that the California-wide crop was nearly 3.8 million tons.

“The quality of the 2015 vintage for California statewide is excellent,” said Robert “Bobby” P. Koch, President & CEO of the Wine Institute. “After three record harvests, a lighter vintage will not impact our supply of California wines for wine lovers nationwide and throughout the world.”

From north and central coast vineyards to Napa to Sonoma to the Santa Rita Hills in Santa Barbara County, the buzz among winemakers was consistent: lighter crops, superior quality grapes, an excellent vintage, and lots of flavor.

Of particular interest to Rutting Ridge Cellars was the Lodi American Viticultural Area (AVA). As stated by one grape grower, “The 2015 vintage in the Lodi appellation was early, light, and intense. The season began almost three full weeks ahead of normal and was complete by the end of September. Red varietals, like Cabernet Sauvignon, had light yields across the board, mostly due to loose clusters and small berry size. Throughout the season, we worked hard to keep up with the fast-paced harvest to deliver wine grapes to wineries at the optimal time with winemakers loving the concentrated colors and flavors of the fruit.”

Of all the winemaking terms that get thrown out there for reds, such as fruit-forward, medium-bodied, and oakey and vanilla notes, it’s that word “intense” that really gets the attention. Full of flavor and richness drives a quality red wine, or any wine for that matter.

All of this praise for the 2015 harvest will naturally leave the consumer in a great state of anticipation—yearning to taste the wine from this vintage. At the moment though, consumers will have to be content with their 2013 and 2014 reds. Depending on the winemaker and what he or she hopes to do with the grapes from 2015, releases will generally be anywhere from fall 2016 to spring 2017. But boy, it should be good stuff!