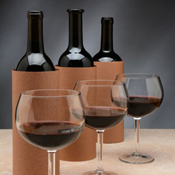 After a whirlwind appearance as an exhibitor at the RMEF Hunter & Outdoor Christmas Expo in Las Vegas, a member of the Rutting Ridge team headed to a Christmas party in College Station, Texas, a.k.a. “Aggieland.”

College Station is much like Lawrence, Kansas, home of those “rock-chalk” Jayhawks. They’re both college towns, meaning they’re built around the universities. And as is always found in higher education, wine drinkers are in abundance. Palates can be sophisticated, snobs can be prevalent, and the average “Joe Professor” is just looking for what works for him or her.

On this particular evening, a diverse group of some 20 people were gathered to celebrate Christmas, and thankfully, no snobs were to be found—just educators, retired folks, musicians, and authors: a good crowd for a wine tasting.

Most of you I’m sure have heard of a blind tasting. The word “blind” says a lot. Traditionally, as one source tells it, “The masters stick their nose in a glass of wine. They give it a couple of sniffs, a couple of swirls, and a couple of sips. Then without so much as a glance at the label, they tell you what it is. Sometimes they even tell you what vintage it was from or perhaps even the producer.” Incredible, right?

We reduced our tasting to its simplest form: brown bag each bottle of Cabernet Sauvignon (there was one bottle each from Napa, Sonoma, and Lodi), remove the capsules, and tape off the tops so that no one could see a brand or a hint of where the wine came from.

Next, we numbered each bag one, two, and three. Then, one at a time, each taster approached the bar we were using. This was cool, because only a few people were at the bar at one time, meaning that everyone else could enjoy socializing with the rest of the group.

With a legal pad and number two pencil in hand, each taster’s preference was marked in order of one, two, and three. At the end of the tasting, the results were tallied and then shared with everyone.

What a pleasant outcome! Number two garnered half the votes, and number two was—you guessed it—our Rutting Ridge Lodi Cabernet! We dusted Napa and Sonoma, which means that at least for that evening, we were king. Cheers!