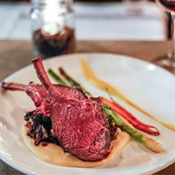 When you say those two words, “the holidays,” most people think of the Thanksgiving start and the New Year’s end. In that time period, particularly at the start, turkey seems to still rule the roost and is plated in a variety of ways: baked, rotisserie, smoked, and deep fried are just a few of the most popular methods. But, it’s turkey, and it seems to live on forever: turkey sandwiches, turkey hash, turkey stroganoff, turkey soup, turkey tacos, turkey enchiladas, and countless types of turkey casserole. It becomes a game of imagination.

Christmas and New Year’s still brings on some turkey, but these days, many thoughts turn to meats such as ham and prime rib. Again, tradition, and that’s a good thing. But it can really be nice to break the norm. And that’s what we’re gonna do with a recipe from north of the border.

Toronto’s Antler restaurant chef and owner, Michael Hunter, is big into wild ingredients, such as foraged mushrooms and herbs, plus fish and farmed game. That’s not surprising, since he’s been hunting and foraging since his late teens. “There’s something really satisfying for me, on an unconscious level,” Michael says about hunting and foraging. “It’s also the freshness of the product, and how great the food tastes when it’s that fresh.”

To break with tradition, we offer a special Canadian Christmas dinner—a roast rack of venison, courtesy of Chef Hunter.

How You Fix It

1. Mix the first five ingredients above, then broil them in the oven until black. Pulse in a food processor until a fine powder is produced, then sift through a fine strainer to remove large grains.

2. Remove any silver skin from venison and remove any meat, fat, or membranes from exposed bones.

4. Pan sear on high heat, about two minutes per side.

6. Discard twine and rest for five minutes before slicing into chops. A great accompaniment to venison is a red currant jelly or another homemade sweet preserve of your liking.

7. Heat a large roasting pan and sear all vegetables (except potatoes) in the butter and oil until caramelized.

8. Transfer to 350-degree oven and cook until tender.

9. In separate pan, cover potatoes with water and boil until tender. Transfer to baking sheet, season with salt, and drizzle with olive oil. Roast in 350-degree oven until skins are crispy.

A bottle or two of Rutting Ridge Cabernet will take this special holiday feast over the top!