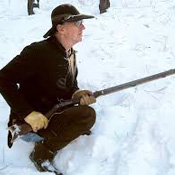 If this isn’t a first, it’s gotta be close to it. Who goes elk hunting these days with an antique muzzleloader? Ed Hauswald, that’s who, a transplant from Virginia to Bend, Oregon.

Ed first approached Gary Lewis, host of  the Frontier Unlimited TV show and author of the book Hunting Oregon, seeking wisdom about such a hunt. Said Gary, “I try to give the best advice, and sometimes people don’t do what I say, but Ed listened, and he didn’t stop there. I told him how to apply for elk (it’s not easy for an East Coaster to learn our system) and how to approach the hunt.”

The rifle Ed used was built by Patrick Smith in Buffalo, New York in 1850. It has a barrel made by Remington. “The barrel is octagonal, 11⁄16 inches across the flats, 34 inches long, 50 caliber,” as reported by Gary. “The bore was bright and the rifling crisp when Ed took possession. Fifty inches overall, the nose cap is pewter, and the old wood shows a repair opposite the lock. The ramrod has a built-in jag and patch-puller screw.”

Nothing about that description suggests that it’s the ideal weapon for hunting elk. However, when a fella puts his mind to it, good things often happen. What once was a collector’s item was now going hunting.

Heeding Gary’s guidance for how to apply for elk and approach the hunt, Ed drew the tag on his first try. That can often be the hardest part.

In November on an Oregon butte, Ed and his friend, Greg Gaut, spotted a herd about 700 yards away in a clearing. Crunchy snow on the ground made it challenging to move quietly in the heavy undergrowth, but as Gary reported, “The wind held while they closed the distance.”

Gary goes on to vividly describe the hunt’s success. “When they were within 110 yards, they found they couldn’t move any closer without spooking the herd. Greg was ready for Ed to shoot, but 110 yards was Ed’s maximum effective range.”

“Two cows were in range—one laying down and one that had jumped up when it spotted the pair. The standing cow began to move off, and Greg whispered, ‘You’d better shoot now!’ For a moment, it was face-on, and then it wheeled to disappear into the tree line.”

“A third cow stepped out of the brush, closer, its head and neck offering the best shot as it moved through tall cover. Ed swung on the only target he could get and squeezed. The hammer struck the cap and fired a small spark into 60 grains of Goex FFF behind a patched 49 caliber round ball.”

“Instantly, a white curtain of smoke hung in the air between the hunters and their quarry. Ed reloaded, and then the pair stalked into the clearing to kneel beside Ed’s first elk. It had been felled with a head shot that dropped the animal in its tracks.”

We imagine Ed will be the first to tell you that Lady Luck was on his side that day, and she gave him a story that he can tell for a long time. It’s a story that’s far better than your neighbor’s fishing tale about the one that got away!