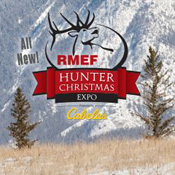 The attendee count was close to 87,000 for the Rocky Mountain Elk Foundation’s 2015 Hunter & Outdoor Christmas Expo. Presented by Cabela’s in Las Vegas from December 3-12, the Expo featured a wide variety of exhibitors, from outfitters to apparel and accessory companies to jerky suppliers. Million-dollar RVs and camping equipment suppliers exhibited in force. An exhibitor manufacturing custom-made tables from giant sequoia trees illustrated the diversity in products available to the public.

Said Steve Decker, RMEF’s Vice President of Marketing, “We are extremely pleased with the entire show. It is by far the largest number of attendees we’ve ever had at an RMEF expo, and most importantly, they were the right attendees for our vendors. We are excited that most of our vendors are reporting they had an outstanding show.”

Located in the South Halls of the Las Vegas Convention Center (LVCC), the Expo occupied the top level of the hall, while the popular Wrangler NFR Cowboy Christmas event was held on the first floor. And over at the Thomas & Mack Center, the National Finals Rodeo was in full swing. All in hall, cowboys and cowgirls, big and little, covered the Las Vegas strip.

“Our partnership with RMEF provided fans with yet another way to enjoy the NFR experience,” said Pat Christenson, President of Las Vegas Events. “In addition to the great shopping, the attractions held in the Wrangler Rodeo Arena—Bullfighters Only, Mini Bucking Bulls, Roy Cooper Vegas Invitational, and Rodeo Live presented by Rodeo Houston—created a new energy.”

Best of all, admission to the combined event was free. More than 900,000 square feet in the LVCC provided for a holiday shopping mecca.

The Cabela’s exhibit, along with RMEF’s trading post, featured a wide array of apparel and footwear. Noted sportswoman and outdoor enthusiast, Kristy Titus, made several appearances at Cabela’s, introducing her jewelry collection. The Chevy truck exhibit was also a major attraction. And Rutting Ridge Cellars was there for the official launch of our Cabernet Sauvignon.

Steve went on to state, “It’s important to recognize that there were several firsts this year: first 10-day exposition, first time with Cowboy Christmas, and first time in the South Halls, among others. And while we’re excited about the success of the Expo, we and our partners at Las Vegas Events learned a great deal this year. We will go to work, incorporate changes based on what we learned, and be right back here again December 1–10 of 2016 to do it all over again.”