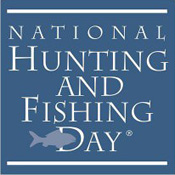 Just recently, Missouri had a gathering. More than a million avid anglers, a half-million hunters, wildlife photographers, and the like all celebrated National Hunting and Fishing Day (NH&F Day).

An area rich in wildlife and natural resources, Southwest Missouri teems with a variety of game, and its fishing makes it one of the top spots in the nation.

The anti-hunting movement of the early 1970s caused conservation leaders “to realize that most people didn’t know the invaluable contribution of sportsmen in wildlife restoration.” Eventual legislation, at the state and federal levels, aimed at conserving fish and wildlife and habitat restoration, led to the creation of NH&F Day—the brain child of organizations “that endorse hunting and fishing.”

Educating youth has always been an important aspect of NH&F Day. At the Twin Pines Conservation Area near Winona, Michigan, a family fishing day took place. Over in Nevada, Missouri, “more than 125 youngsters, along with family and friends, attended a fun event that included archery.” Deer and turkey hunting were also topics of interest for children of all ages.

Adam Dean, organizer of the Nevada event, was quick to point out event benefits, stating, “this was our fifth annual Youth Outdoor Event. It’s all about the kids, as they are the future of our outdoor sports. They received free admission, free food, and door prizes. The weather was good. It has grown into a big, fun event. Kids’ activities started at 9:00 a.m. and continued until 4:00 p.m. Among the most popular was firing a black power gun.”

“Over the years, we have had great sponsors,” Adam added. “The first year, we had only one sponsor, but this year, we had 40. It is a good event to tie in with the annual NH&F Day. I think this event helps us pass our hunting and fishing heritage to our next generation. Many of the kids may not have any other exposure to these type activities.”

Some of the sponsors of this Youth Outdoor Event were “the National Wild Turkey Federation Chapter, Osage Prairie Thunderin’ Toms,” along with “the Missouri Conservation Department, Ducks Unlimited, and 4-H Shooting Sports.”

Dads, moms, and kids from throughout the Ozarks attended. Said Hugh Davis from Joplin, “I had heard about the event, so I came over to see what it was all about. I was impressed and will work to do a similar event in Joplin. I saw a lot of happy kids that learned about and enjoyed the outdoors. It was an event that projected a positive impact of the mission of NH&F Day, getting more families and children outdoors.”

Safe to say, the success of NH&F Day now means that many families mark their calendars months in advance as an event they do not want to miss. As one of this year’s attendees was overheard to say, “The family that hunts and fishes together, stays together.”