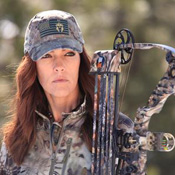 Just a few years back, the relationship between the Rocky Mountain Elk Foundation (RMEF) and the Wyoming Women’s Foundation (WYWF) was scant. Today though, it’s a different story. With WYWF’s creation of the Wyoming Women’s Antelope Hunt, RMEF has emerged as an ardent supporter of the event. No other organization grasps the role hunting plays in conservation more than RMEF, and it was only natural that it wanted to support women interested in hunting.

Said Jill Tonn, Senior Regional Director of RMEF, prior to this year’s hunt, “RMEF is pleased to once again support the Wyoming Women’s Antelope Hunt. Women are playing an ever-increasing role in the hunting and conservation arenas. We wish all the participants the best of luck and hope the women continue hunting.”

The antelope hunt has become an annual project of WYWF, which is another extension of the foundation’s overall objective of establishing opportunities for women. The hunt is yet another example of promoting camaraderie and mentorship “with the goal of raising awareness and funds for the foundation. In just two years, the event has raised more than $120,000, impacting grant-making and special projects that improve the economic self-sufficiency of women and the future of girls across the state,” said Jill.

To have the support from RMEF is icing on the cake for WYWF. “The Rocky Mountain Elk Foundation is known not just for its conservation of elk, but also its stewardship of lands and habitat, which is incredibly important to hunting and to Wyoming,” said Sarah McCance, WYWF Director. “An important part of what we do at the hunt is to promote hunting ethics and conservation practices.”

The hunt, created in 2013, has become national in scope. Sportswomen from across the U.S. participate, including prominent leaders like retired Wyoming Supreme Court Justice Marilyn Kite, who helped found the hunt. In a relatively short period of time, this event has become a big success.