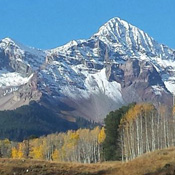 We’ve all got a bucket list. Some of us have it committed to memory. Some of us keep a running list in play. And some of the items on our lists end up as just dreams. But for Cast & Blast Outdoors co-host Rob Newman in Alabama, that dream became reality—an elk hunt in Telluride, Colorado. It was a trip that was months in the planning and “coincided with the peak rut for the bugling elk.”

Newman took this trip seriously. Being in thin-air Rocky Mountain conditions, this guy from Alabama undertook a training regimen—lots of “walking the hills around South Montgomery County with a five-gallon backpack sprayer full of water.” Hardly would this compare to hiking in the Rocky Mountains, but getting into some kind of shape was mandatory. Walking five to seven miles a day at 10,000 feet was not for the faint of heart.

A panoramic scene greeted Newman upon his arrival in Colorado—lows in the 30s and highs near 50 degrees, coupled with bright blue skies and Aspen trees at the peak of fall color set the stage for ideal elk hunting.

The hunting party numbered four. Newman was a “non-resident observer” and “did not have an elk tag. The western style camp was like going back in time, with a large canvas tent with a wood burning stove and a rather old Gulfstream camper.” Anticipation—and a chorus of bugling elk—made a good night’s sleep a losing cause. Dawn couldn’t come fast enough. With the sun rising in the east, the hunting party set out each morning to a different location.

The best morning found the party positioned “in between two bulls bugling, trying to round up a herd of cows.” When both bulls “appeared out of a river bottom only 55 yards away,” the typical happened. The bigger 5×5 bull detected the party’s movement and disappeared back in the thick timber. As luck would have it, one hunter still managed to “tag out on a nice 5×5 bull.”

The next phase of the hunt would not be near the fun and excitement of tagging the bull. The rest of the day was spent packing the elk out by horses to the camp, some seven miles away.

Obviously, a hard day’s work deserves celebrating. The hunting party topped things off with elk backstraps and “red wine for supper under the Colorado starlit sky.” Doesn’t get any better. As Newman said, “It was the ultimate hunting trip, and I’m already in the process of making plans for the next elk season in Colorado.”