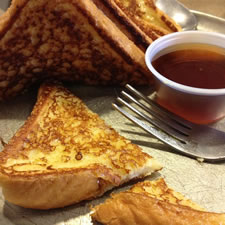 Most people identify “brunch” as a combination of the words breakfast and lunch. Many consider it as a lighter fare served sometime after ten-ish in the a.m. Lighter, of course, becomes a subjective word after dining on an omelet stuffed with sausage, peppers, two different kinds of cheeses, onions and a side dish of hash browns big enough to fill a large size cereal bowl. Oh, then there’s the fruit, the breads, and the pastries. Add to this a pint of fresh-squeezed orange juice and a half pot of coffee, and there you have it—lighter fare.

There’s also that issue of the hangover, which apparently led to brunches starting after 10:00 and often lasting til 2:00. Clear the cobwebs so to speak so one can discover what they’re ladling on their plate. And of course a grande-size bloody Mary with at least three jiggers of vodka just makes a world of difference when you’re trying to collect your thoughts.

But the English had much to do with the origin of brunch, the history of which you can follow in this article: When Did We Start Calling It ‘Brunch,’ And When Did It Become A Thing?