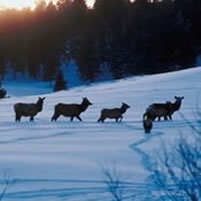 It started out as an experiment to restore elk to the North Carolina mountains. That was 15 years ago. A herd of 52 elk was shepherded into the Great Smokey Mountains National Park. The experiment has flourished.

Today, this herd is substantially larger with groups of elk breaking away from the original herd and moving outside the boundaries of the park. With apparent herd growth a given, “the N.C. Wildlife Resources Commission has come out with a proposal to pave the way for an elk season, putting up the legal framework to make hunting possible once it deems population levels high enough.” Normally, proposals of this nature—hunting and wildlife management—can be controversial. That’s not the case here. This proposal is being well-supported by a broad spectrum of people concerned with conservation.

“This is something that should be hailed and cheered,” said Tim Gestwicki, CEO of the North Carolina Wildlife Federation. “The elk made it. The elk are prospering. The elk are expanding. The elk are in search of other habitats, and this (hunting proposal) provides us the opportunity to get more support and more conservation. It’s wonderful.”

“We always hoped it would be a very huntable population in years to come,” said David Whitmire, program chairman for the N.C. Bowhunters Association and owner of Headwaters Outfitters in Rosman. “It would be awesome for your kids and grandkids to be able to hunt elk in the Pisgah National Forest.”

“It’s fair to assume that the conservation community as a whole supports the management of elk in the Southern Appalachians, and we recognize that hunting is an important part of that,” said Ben Prater, southeast program director for Defenders of Wildlife, which is based in Asheville.

Even with this elk permit-only hunting initiative underway, according to one state authority, hunting is, at the least, still five years away, which means that the top priority in herd management will always be the vitality and sustainability of its population.