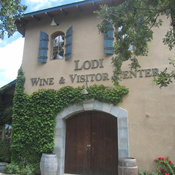 More often than not, the mention of Cabernet Sauvignon at most wine tastings in this country leads to conversations about Napa and Sonoma. However, Allison Levine at Napa Valley Register.com says it’s time to “rethink Lodi.” Think Lodi, and “hot climate, high-alcohol wines, mass production, and large brands” are often used descriptors. That’s not necessarily inaccurate, but there’s a lot more to Lodi than its jug wine reputation. That was then, but this is now.

Levine points out that “growing grapes for 150 years, Lodi is one of the few regions in the world that did not suffer from phylloxera, which destroyed most of the world’s vineyards at the end of the 19th century. Through geological events and alluvial waters, the two major rivers (Mokelumne and Cosumnes) originating in Sierra Nevada bring soils rich in granite-based minerals and sandy loam. These porous soils are inhospitable to phylloxera, and more than 5,000 acres of Lodi vines still grow on their own root stocks. In Lodi, old vine means old vine, with many as much as 65-70 years old.”

Another part of Lodi’s terroir is its Mediterranean climate, resulting in a growing season that’s “sunny and warm, hitting highs of 90 degrees, followed by ‘delta breezes’ in the afternoon.” Night time temps drop to as low as 56 degrees. Rain is slight and “humidity levels are low.”

AVA status was granted in 1986, “and since 2005, there are seven sub-appellations.” Since the 1990s, Lodi has evolved into a tourist destination with some 65 tasting rooms.

“Lodi is casual, approachable, and not stuffy,” said Camron King, Executive Director at the Lodi Winegrape Commission. “Visiting Lodi is like coming into someone’s home. It’s the owner pouring wine from the family winery, and it’s a philanthropic community. It’s all about family.”

Two-thirds of the 110,000 acres in Lodi are planted to red varieties. Cabernet and Chardonnay are big crops, but there’s also an emphasis on Italian, Spanish, Southern Rhone, Portuguese, and German varietals. The point is there are a lot of quality wines coming out of the region, and at prices substantially less than their counterparts from Napa and Sonoma.

Adding to the region’s growth in number of wineries and its focus on producing more reserve type varietals, “Lodi leads the state in its commitment to sustainable agriculture, establishing ‘Lodi Rules’ in 2005, California’s first third-party-certified sustainable winemaking program. The program promotes practices that enhance biodiversity, soil health, and water cleanliness, and currently 26,715 acres in Lodi are certified sustainable.”