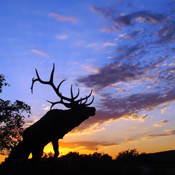 The Utah Division of Wildlife Resources (DWR) is going to the public for reactions to its proposed changes for the 2016 elk hunts. The current herd count is somewhere in the neighborhood of 81,000 animals, and that’s a number that has made managing herds and distribution a priority of the agency.

The increase in elk population is a result of population objectives established by DWR, compounded with “obtaining harvest on private lands that manage for elk and movements of elk from tribal lands to public lands during winter.” Quality habitat is key to developing healthy and productive herds, however, “crucial Utah elk habitats are constantly being fragmented or lost due to road construction, OHV use, and energy development,” according to DWR.

DWR Big Game Coordinator Justin Shannon reported, “We’re happy elk are doing well, but we also need some new management tools to help us get the herds back to the objective. One challenge we have with elk is managing distribution. In many areas in Utah, elk are increasing on private lands and decreasing on public lands. Some of the tools in the plan—including private lands cow elk permits—will help us address these types of issues.”

With the circumstances as they are, DWR has put forth a plan to more effectively manage herd size. The root of the proposal is to increase hunting opportunities beginning with the 2016 elk hunts.

Firstly, hold two elk hunts simultaneously by doing something that has never occurred before in Utah—“allowing limited-entry rifle elk hunters and general spike rifle elk hunters to hunt some of the same units at the same time,” and secondly, providing more hunting on private lands.

As proposed by DWR and reported by KSL.com, “The dates for the general rifle spike elk hunt and the new limited-entry rifle elk hunt are October 8–20. Utah currently holds two limited-entry rifle elk hunts: an early hunt that begins in mid-September and a late hunt that begins in mid-November. The new hunt, which would be held in mid-October, is designed to move some permits out of the early rifle hunt—where demand for permits is highest—and place them in a hunt that might provide better drawing odds.”

Additionally, DWR’s proposal included the provision of incentive programs for landowners to make available more hunting opportunities on private lands, and a private-lands-only permit was proposed to encourage hunters to target cow elk on private properties.

The public can respond to these proposals by e-mailing the Utah Regional Advisory Council member in their area. Member information can be found at http://wildlife.utah.gov.