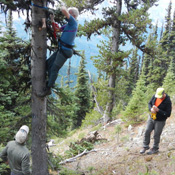 Mike Sinclair is a researcher for Microsoft. According to a recent story written about Sinclair and Microsoft, when a heavy winter sets in, particularly in an area such as the North Cascades of Washington state, “with its deep snow and avalanche conditions,” hiking your way to the “backcountry and other logistically challenging terrain” can be next to impossible. Of course, it’s these same conditions that bring out the wildlife and those “high-elevation species, such as wolverines, lynx, fishers, and gray wolves.” These animals roam at great lengths, covering lots of territory, and don’t care about running into people.

So how do you keep track of these critters? Typically, researchers “will release a scent that catches their interest, and then use a remote camera—also known as a camera trap—to snap pictures that help monitor these animals.”

Nifty, to say the least. Attract the creature and play the “candid camera” game. This is an active time for many species and a great opportunity to study their habits, thus advancing wildlife conservation. Hold on though. “The bait or scent at these survey stations usually has to be replenished every one to three weeks.” That’s the rub—and no small task in the middle of a snowstorm with no relief in sight.

To the rescue comes Sinclair and his team. They “engineered the missing piece that Seattle’s Woodland Park Zoo and Idaho Fish & Game needed to keep their scent dispensers operating all winter long.”

“We were struggling to find something we could leave out to attract wolverines and other animals. How do we take stinky liquid lure and make it last all winter?” asked Dr. Robert Long, a Senior Conservation Fellow in the Field Conservation Department at Woodland Park Zoo. “We needed someone who could build some kind of electronic device that could dispense liquid.”

Over the next six months, Long, Sinclair, and Joel Sauder, Ph.D., a wildlife biologist for Idaho Fish & Game, undertook the task “to create an ultra-low power control processor powered by lithium batteries—programmed to release three milliliters of liquid scent lure each day for six to nine months without maintenance, through a mini peristaltic pump.” The end product was a processor board that was replicated multiple times and handed over to conservationists, “who integrated the boards into metal, bear-proof kits that house the liquid scent pump system.”