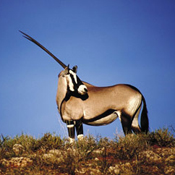 When it comes to hunting trips, sooner or later the subject of an African safari will come up. It’s still a big business, and as evidenced by the outfitters at RMEF’s just-concluded Hunter & Outdoor Christmas Expo in Las Vegas, all it takes to get there is that green stuff called money.

There are also individuals other than hunters who hanker to make the trek to the plains of the Serengeti in northern Tanzania to observe the beauty of the wild animal kingdom. Most of these hunters and observers share a common interest: habitat conservation.

It was recently reported that “Google and Aid for Africa member Lewa Wildlife Conservancy have teamed up so you can take an African safari virtually.” This is back to that green stuff: money. If you can’t afford to visit Africa, technology can get you there.

This is all accomplished by using Google’s Street View. Now, “You can visit Lewa’s Kenyan reserve, follow animals, and traverse the African savanna in Kenya in real time.” Seeing wildlife where it lives hopefully will increase awareness of the importance of wildlife conversation.

Combining technology with wildlife conservation is not a new thing. The use of radio collars by scientists has been a common practice for years. But these collars require the use of handheld receivers in close proximity to the animals, and that’s not necessarily the best approach for wildlife research.

The use of radio collars has in more recent years transitioned to include the use of smartphone tools—GPS and other technologies—which adds to the make-up of the conservation tool kit. As an example, a dwindling herd of elephants can now be tracked in real time. Seeing where these animals live and range can be vital in “planning where to send patrols to guard” elephants.

In the not-too-distant future, it’s not unimaginable that drones could become another tool in the conservation arsenal. Although expensive, these unmanned aircraft go beyond just real time. Rangers on the ground can be notified immediately about wildlife location, migration, and poaching. Eyes in the sky—the ultimate conservation monitoring tool.